Pink tongue lizards are the lesser-known relatives of the blue tongue lizard. They are found in thick bush along the east coast and are semi-arboreal. 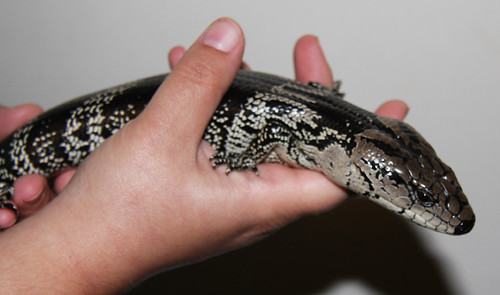 And they do have a pink tongue.
( Collapse )

There is a classification system WIRES uses when we assess injured creatures: cause of injury, the injury, and the creature's fate. This afternoon I had to hike* along the concrete path that runs along the river bank from the centre of town to the zoo. There was a cockatoo caught in the tree. The cause was Entanglement (EN), in this case fishing line had tied the bird to a branch high in a tree. There was no apparent injury that I could see (NA), apart from the fact that the bird had died before I arrived (DI) and was swinging in the light breeze. This movement lead the caller to think the cocky was struggling to free itself, and when I took my glasses off and squinted at the body hanging 30m off the ground, I could make the same mistake.

I called the 'rescue' in to the phone monitor and we came to the conclusion that there was no way we could have rescued the cocky; the branch was hanging over a deep water-hole in the river. While I was on the phone I noticed movement in the sky behind the body, and realized a pair of wedge-tailed eagles were circling over the town. I told the monitor and she joked about "I wonder who's chihuahuas they were hunting." We laughed.

As we reminisced about the young eagle of Trundle and the Shrinking Pack Of Chihuahuas, I became aware of a fellow path-user shouting something. I turned to him. "Sorry?"

"THERE!" He pointed. No, he pointed in my direction. Hang on... he pointed AT MY FEET. I looked down.

An eastern brown snake had emerged from the thick grass beside the path and was now about a foot away from my foot. The snake continued to emerge before stopping at my feet. Its tongue flicked out and touched my shoe.

At this point Instinctive Den leapt from his cage and, powered by adrenaline, began to scream and flail. Before he could do something stupid, Rational Den and Shit-Scared Den tackled him and shoved him back into the cage and wrapped it in a fluffy blanket. I really wanted to leap and flail and scream but that is exactly the right thing to do if you want to get bitten. I didn't, so I didn't. So my sweat glands took on the job of flailing and in seconds I looked like I'd run a marathon, dripping and wet from standing still.

The snake continued to emerge from the grass and passed in front of me. It even used the toes of my shoe to aid its slithering to the other side of the path. It started to disappear into the grass to my left. I looked to my right and the snake was still emerging from the grass there. The path is 2m wide and the snake was hanging over both sides. After a moment the emerging end started to thin, and then it was just the tail. And a few seconds after that, it was gone.

I became aware of a voice in my ear. I was still on the phone. "What?"

"Yes! A bit freaked out but unbitten." I decided it was now a good time to head home and drink more Jack Daniels than I would normally drink. And that is exactly what I did.

When I came home from work today, I discoved that I was being menaced by a dangerous creature. 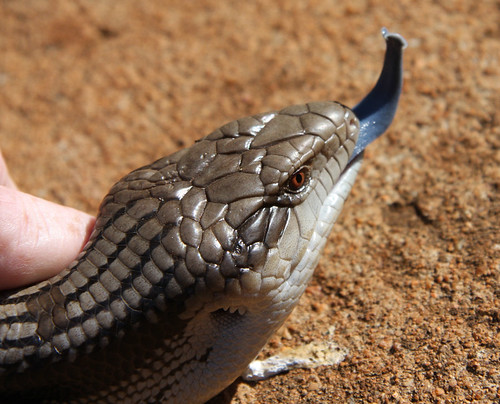 A native Australian velvet gecko running around my wire screen door, licking up bugs. For scale, the wire holes are 2mm x 2mm. These little fellows don't make much noise, unlike their tropical cousins. 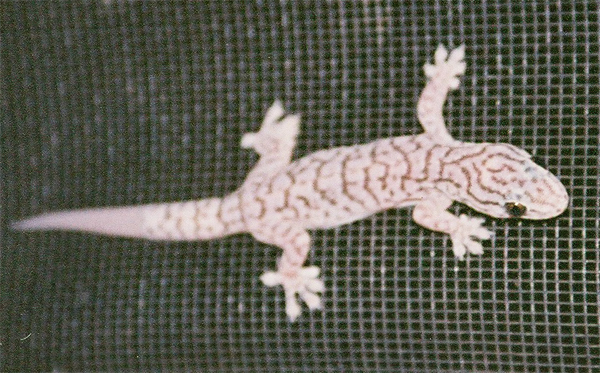 Oh yeah. I had a film developed today. More photos to come.
Collapse