The procedure had to be done in the CT Scanner with me lying still. The tech put a target patch in my shoulder, sent me into the scanner, then returned and marked a spot on my back. This was okay.

The Doc entered the room, administered a local, and said "Okay, this might still hurt a little." He explained that he would put the needle in, pump in some saline, then put me through the scanner to see if he had the needle in the correct place. "Don't move!" he added.

I said "Aargh!" as the needle went in. And "AAAARRRRGH!" as the saline was injected. Then the doc removed the syringe but left the needle in place FOREVER while I was pushed through the scanner again. He'd hit the right place which meant he didn't have to removed the needle and start again. Which was nice.

"Okay, I'm going to inject more anesthetic before the cortisone, but it might still hurt a little."

It did. I said "aargh!" then "MMMMMMPH!" into the foam supports holding me in place.

And it was over. 20 minutes was all it took. It hurt a lot at the time but that pain quickly subsided into a sort of dull, constant ache I've felt for the last 24 hours. It's about a 2 to 3 on the 1 to 10 pain index. I didn't sleep well because the pain woke me when I moved and stressed the shoulder, and I'm feeling a little wrecked today.

The 3rd and final shot is in 6 weeks, and after that I'll know if I need an operation. 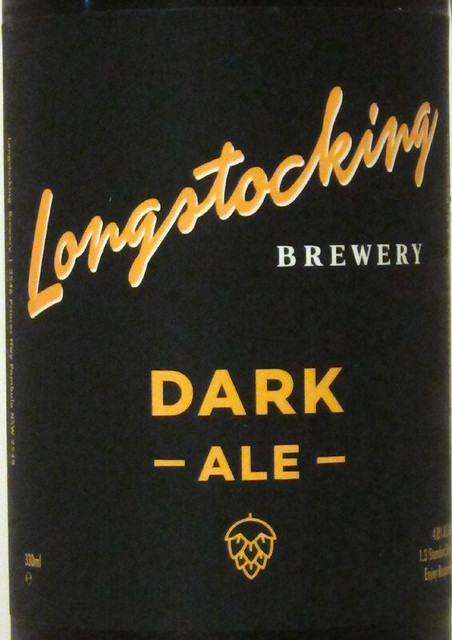 First sip: Strong malt, with chocolate, coffee flavours up front. Very little hops - enough to put a very mild woody bitterness on the swallow. None of the flavours last long. Mild carbonation tingle on the tongue. Quite warming in the belly.

I know it sounds a little insipid, but this is a very drinkable beer. It goes down well, maybe a little too fast, and leaves you wanting another sip as soon as you finish the last. The dark maltiness wants me to linger over the brew, but I find myself halfway through the glass in no time at all. This is a yummy beer which leaves you warm in the belly.

Make that 2/3 of the way through the glass. 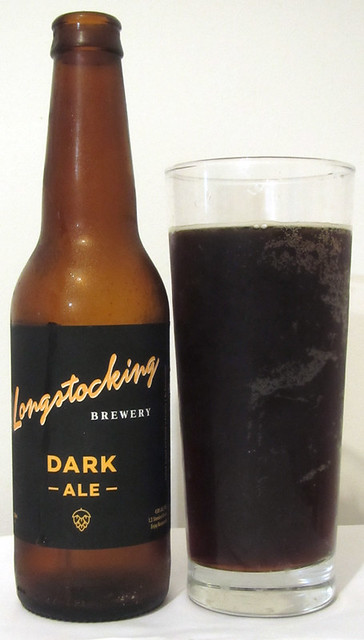 Good news! It's not urgent! I can have the operation here in Dubbo as day-surgery. I see the orthopedic surgeon in April to work out dates etc.

Bad news: it's not urgent, so I go on a queue that will exceed a 12 month wait. I can dip into my private insurance to reduce the wait time but I'll take a financial hit with premiums. Or I can get it done free under Medicare but have to wait on the long queue. Either way, I will have to put up with the dodgy shoulder for some time.

The results of the MRI are in. It's not bursitis. I have a tear in the socket cartilage which runs from the 11 o'clock position to 1 o'clock - a SLAP tear - plus a little "subacromal subdeltoid bursal inflammation." I will have to spend a day at Royal North Shore for a short operation to fix this on a date to be determined. 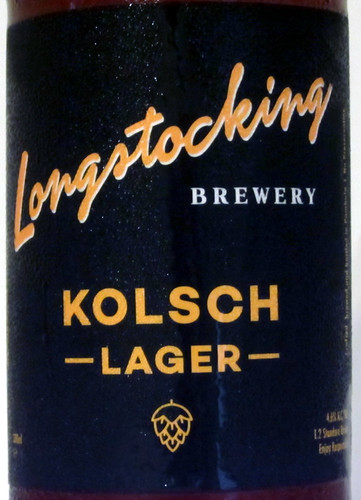 Pours a clear amber with a smallish head. Some carbonation visible in the glass.

First sip: mild malts up front with a very mild grapefruity after-taste. A small amount of hops which is barely noticeable at first but lingers on the back of the tongue long after the swallow. Medium mouth-feel with a tingly carbonation on the tongue. Nice beer burp.

Technically it shouldn't be called a kolsch because it wasn't brewed in Cologne. Never mind - this is a very yummy brew. It goes down very easily and is warming in the stomach afterwards. Highly drinkable, and best enjoyed ... well, anywhere really. At the brewery on oyster night would be best, but at home in front of the PC playing Kerbal Space Program is great, or watching telly, or at a BBQ would be fine. 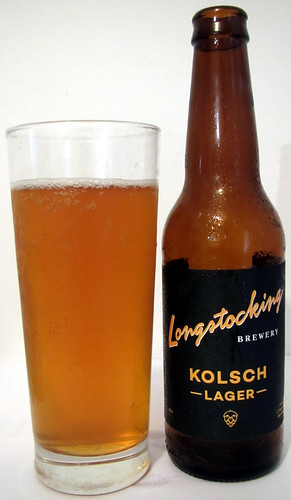 I spent the day having my shoulder MRI'd.

Step 1: dye injection. I lay in front of the CT scanner so they could see where they needed to inject the dye because it had to go right into the joint. The nurse stuck a grid pattern on my back. Then, after some moving in and out of the scanner, she returned and put a tiny mark on my back. Then the doctor came in and explained what would happen.

"You won't feel a thing, said the doctor lying to the patient," said the doctor, (actual words by doctor)
Oh?
"Actually, you'll feel a tinge. But first I have to make sure the needle is in the joint," he added.

So he stuck the needle in - I didn't feel anything - and he put a lead-lined hazmat apron so the nurses could move me back into the scanner and scan. Apparently he got it in.

"Good. Now I'll inject the dye. Tell me if you feel the tinge."
After a few seconds I felt the pain tingle in my shoulder. "Tinge!" I said.
"Good!"
"Good that it's going in the right place? Or good that it hurts?"
"Both!" he said happily.
I could really feel the dye going in now. "Tinge! Tinge! Tingetingetingetinge!"
"Hmm... you really shouldn't feel that." After a few seconds he said "All done! Now I'll inject some saline. It'll feel like someone is pushing a tennis ball into your back.

Step 2: MRI. I had to put in some high-density foam earplugs and head phones, then lie on the table and relax completely and stay still while the techs pack foam pieces around me so that I wouldn't move. My shoulder was clamped in a shoulder... clamping... thingy. A panic button was given to me to squeeze if I panicked. Because nothing metal could be in the scanner, the panic button was an air bulb connected to a tube that lead to a sensor outside the room. Music was piped to the headphones the same way. And then into the narrow tunnel for the MRI. The music in the headphones was barely audible over the noise of the MRI. I closed my eyes and spent 20 minutes trying to stay absolutely still. It's very difficult, even clamped in foam and shoved into a long tube.

And then it was over. In the end I was given a DVDR of the scans, and went home.

Medicare covered it all because it wasn't for workplace injury insurance. Which was nice.

A drive along the scale Solar System from Dubbo to Siding Spring Observatory. The model uses the dome of the observatory as the scale of the Sun, with the planets posted at the appropriate scale points along the highway.

Back from the physio. The assessment took 30 minutes, and involved lifting, turning, and rotating my right arm to work out what the limits are.

She is 90% sure the problem is bursitis. (5% arthritis, 5% capsulitis, if you're wondering about the other possibilities) She said an ultrasound would confirm it, but she didn't want to order one unless she thought a shot of cortisone was required.

And then she gave me a massage on the muscles around my right shoulder blade. It was very, very painful. I said "Ow" a lot.

Me: That really hurtOW! What are you doing?
Physio: I find the muscles that are tight and press down on that point until the fibres relax.
Me: Argh.
Physio: They are called Trigger Points. Does the pain radiate to other areas?
Me: No, just where you are presSING!
Physio: Wow. This is a lot of trigger points.
Me: IIIIS that a bad thIIIING?

It was not a good thing. I have been given a bunch of exercises to do, to strengthen my shoulder and back muscles. And lots of Ibuprofen.

NBN went down 5pm. Saturday, last week. I turned the modem off and on again - that didn't work. So I turned it off for an hour and turned it back on. Nope. Too late to ring Telstra. Still no connection Sunday morning so I rang telstra. Unhelpful tehnician was unhelpful - he got me to turn it off and turn it on again. Still no connection. So he organized an NBN tech to look at the connection. The earliest time: between 1pm and 5pm. In 5 days on Friday. I expected he will test all the house connections first (they worked until Saturday afternoon.) Then he will turn the modem off and on again. Then he will actually work on the problem. I also expected the problem to self repair before he gets here. So, no internet or landline until then. Buggerit.

In the meantime, I discovered the problem is definitely in the FTTN box. Dad's internet and both his neighbours nets were down. The bad news is Dad's neighbours are OAPs and now had *no* phones. Dad is also an OAP but he is more tech savvy and has a mobile, so mum and dad were not isolated.

Whatever the problem that took out many local connections on Saturday was resolved on Monday, and I had a nice, fast, and stable connection, and so did Dad and his neighbours. Until Wednesday afternoon. When it stopped again. I called Dad to see if he had problems (nope, just me) So I called Telstra, again, to resolve the new problem. This time i told the tech about my previous calls and what I had done (ie turned it off and turned it on again) and she said "So what I want you to do... (long pause) You know what? I'll skip the trouble shooting and escalate it up to the next level." I bet she was about to ask me to turn it off and turn it on again, then realized what she was about to say. So later the Next Level tech rang and started to question me about cords and cables etc, and I was getting frustrated.

"Look, It has worked since it was installed," I said quickly, "And then it didn't, and I have not touched anything!" I might have sounded a little... grumpy. He said he would run more tests and someone would call back tomorrow.

Thursday, the modem had a full set of green lights. YAY! then at 3pm the connection died. Red status and internet lights, no landline phone. Again. So I called teltra. again. And the trouble shooting did not help. again. And it was escalated to the next level. again.

Still dead Friday morning. So I rang Telstra at 9am and got a very helpful tech who could not help. He asked me to do a factory reset, since that was the only thing we had not tried before. (Spoiler! It didn't help.) We got chatting while we waited for the modem to reboot and I mentioned it was a bit cold. He said it was a bit cold there, too. I had a sudden thought.

So in the end I will be receiving a new modem on Monday, courtesy of a techy who thinks I live in some frozen hellish wateland beyond civilization. Until then, I have a very iffy connection and a mobile phone I can turn into a wifi hot-spot I can connect to via laptop. Yay updating!