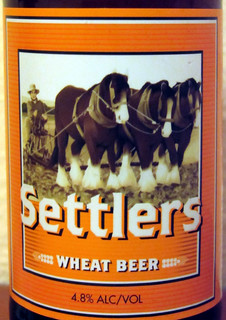 Pours a slight cloudy pale amber, with a large creamy head that fades away very slowly to a thick lacing. Small amount of carbonation visible in the glass

First sip: Some grainy, bready, almost biscuity malt and yeast, followed by a lot of lemony citrus flavours that linger for ages. Very small amount of hops flavour is trying to make itself known, but it is shouted down by the citrus.

That last sentence makes me sound like an opinionated beer git.

Mouth-feel is tingley on the tip of the tongue and slightly creamy. The beer-burp is nice.

Bugger. I *am* an opinionated beer git.

But this is a rather nice beer. It doesn't have have that yummy malt I like so it feels quite light, and yet it is still a very nice brew. I could drink a lot more of this. In fact, it's the perfect beer for a mild chicken curry. In fact part 2, I would say this is a yummy beer, with or without the curry. 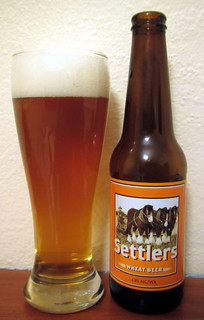