sjwt at Bleh
Originally posted by

hedgegoth at LJ: Scrapbook Changes (What the hell??)
Originally posted by

azhdragon at LJ: Scrapbook Changes (What the hell??)
Originally posted by

springheel_jack at LJ: Scrapbook Changes (What the hell??)
Originally posted by

I'm just going to put out this PSA:

Livejournal Scrapbook is going away and will be replaced by the mysterious "Photo Album". Your 10GB of Paid Member space is now 2GB. If you care, there is an explanation in Russian on the Russian news page. There's also a user-submitted translation.

+ You will no longer have access to your Scrapbook once this goes live.
+ Your images will redirect to Photo Album, but the URL will be different.
+ Friends-only and custom security settings will default to private and have to be changed back manually.
+ Unable to tell what will happen to any photos you have that put you over the 2GB limit.
+ Back up your Scrapbook just in case.
+ If you want your photos transferred over now instead of waiting, let them know here. 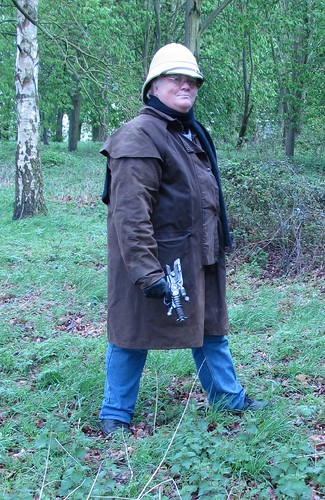 Dennis Fetherstonhaugh-Cholmondeley-Smythe (Explorer and Naturalist) photographed exploring the wild woods around Grafham Water. The day was dark and gloomy. 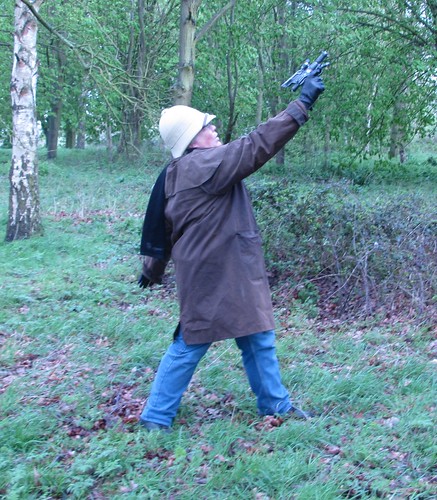 Getting ready to add a squirrel to the Endangered Species list.

Another IPA. I hope this is better. Maybe the strong cheese will help. 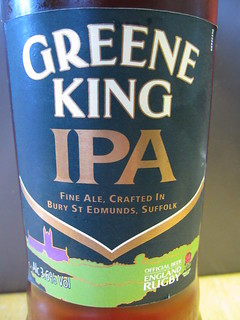 Pours a clear red amber with moderate carbonation. The head is small and white and fades slowly to a thin lace.

First Sip: Mild malts, mild hops, mild bitterness. The hops fade away quickly and don't hide the other flavours. Mouth-feel is smooth with a carbonation tingle.

I like this IPA. It's not too strong in taste and does not have the lingering bitterness or astringent taste that made the Eagle IPA such a disappointment. This is a nice beer - nice, not yummy - and would go down well on a really hot summer's day. It's a pity I haven't seen one of those.

My goodness... it does go well with a nice cave-matured cheddar though. The cheese cuts through the bitterness, and the beer quenches the extreme cheddarness.

And now the beer has warmed a little in the glass. I've changed my mind. This is yummy. 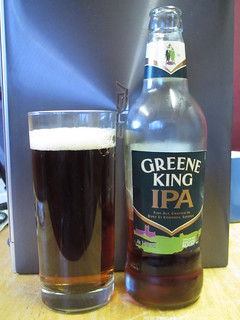 Same again, sir? Yes, and bring the cheese board.

Yesterday was wet and miserable, so we had a Day In. I washed clothes and just generally farted about. Late in the afternoon we went to the movies. Sheena & I saw the Aardman animated PIRATES! (An adventure with SCIENTISTS!) and laughed a lot. Aaron saw Avengers and was really impressed.

Today was wet and miserable. I thought "Bugger this, let's go out." Sheena & I went to Flag Fen to take in some ancient culture. The rain bucketed the wind blew. The attendants at Flag Fen were astonished when we walked into the visitor center. I am in England and I am going to TOUR, and SEE THE SIGHTS, dammit! The weather is doing its best to discourage me and I WILL NOT BE DISCOURAGED! No matter how damp I get from this crap English weather.

Flag Fen is an interesting site; a waterlogged fen where ancient wooden objects were preserved, and which was a significant site where people offered precious objects to the waters. Archaeologists have built a bronze-age round-house (damp, cold) and an iron-age house (dry, not as cold.) We wandered through the museum and saw the remains of England's oldest wheel, bronze swords, jewelery and axes, and some animal bones. It is rather good. A nice hot cup of tea was obtained at the visitor centre, and we were off.

Lunch was at the Jolly Sailor in Ramsey. 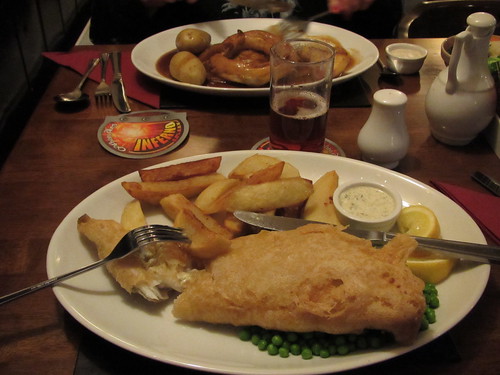 Beer batter fish, hand-cut chips, and a half of Abbott's.

And so we arrived at the Rural Museum at Ramsey. It is stuffed full of old farm technology from the mid 1700s to the 1950s. I suppose that would be mid-1900s. There is a lot of domestic pieces, and it is all interesting.

And so after a nice, hot cup of tea, we were off. A quick trip to Grafham Water to let the Explorer get out his pith helmet and ray gun, and then back to Offord. Sheena took me via Buckden to look at the old Abbot's Palace - Buckden Towers - and then home to Offord. With a quick stop at Buckden Marina to get photos of narrow boats. And then home to Offord.
Collapse