I visited the Little Brewing Company while I was in Port Macquarie. The brewery is a large tin shed with a lot of stainless steel vats and a couple of *very* enthusiastic owner/brewers. We fell to talking about beers, and ended up in an impromptu beer-tasting session. They only make four beers; I was forced to buy a four-pack of each. It's a terrible job but I owe it to my readers. 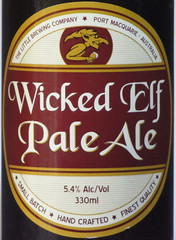 Pours a pale brown with lots of fizz. The head is large and frothy, and breaks down into large bubbles moderately fast.

First sip: strong taste of grapefruit up front moderated by a nice malt taste. There is a lot of hops taste following, and a long lingering hoppy after-taste. A *very* long lingering after-taste. Not as strong in hops as the Sierra Nevada Torpedo but it is substantial. Nice beer burp. Mouth-feel is dry and a little fizzy.

This is an excellent hot afternoon's quaff. It may be a little too hoppy for some, but I like it. Interestingly, it retains its flavour as the glass warms. Normally ales and lagers get worse.