Another wheat beer from the world's oldest brewery. 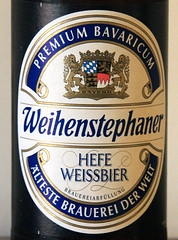 Pours a cloudy orange with a large, creamy head that takes a long time to fade.

First sip: Mild malt with a noticeable bready yeast and a very faint citrus. Hops are very mild but not so mild as to be absent. Very smooth in the mouth with a slight carbonation tingle, and a dry finish.

This is another with no one dominant flavour, just a whole... beery... yummyness. This Hefeweissbier has a more noticeable yeast than the Dunkel. And as the glass warms, the flavours become better.

This beer brings back memories of my first visit to Germany after the Wall fell but before Reunification, driving around Bavaria in Anja's dad's Ford Skorpio (a really nice car! I wanted one.) We stopped at a hotel and I popped into the bar for a drink. There was a bloke pouring a beer into his glass. His beer had a huge head, and he was using the bottle to suck the head away as the beer came out. "What a strange way to pour beer!" I thought. Now I know why he poured it like that. My second thought that night was "Wheat beer? Eurgh!"

If only I hadn't been such a beer snob! I regret that it has taken me this long to try a wheat beer. Because this beer is a very yummy beer.

Last one from Weihenstephaner. Not a wheat beer this time. 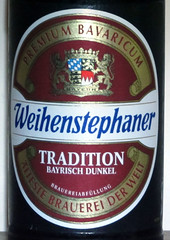 Pours a very dark, cloudy reddish brown with a small, tan head that fades fast to leave some lacing on the surface.

First Sip: Toasted grainy malt, with a little caramel in there. There is a mild hops that lingers on the back of the tongue. Nice, smooth mouth feel with a crisp, dry finish.

This beer has a much stronger taste compared to the previous two from Weihenstephaner, and even though it has that whole beery yummyness, it's not as yummy as the others. This isn't a weissbier -- I think I was expecting one and this is affecting my judgement.

Even so: Yummy beer.