While wandering through Myers today, I saw they had a sale on for various point-and-shoot cameras. So I bought a new Canon IXUS 1000 with 2 x 16GB sd memory cards. The 1000 shoots in proper HD video which is nice, and can film is super slo-mo, which is also nice. It can also film in that strange format that makes the world look like a model train set. Which is... odd? Useless? *shrugs* I don't expect I'll find a use for that format. Ever. I'd prefer timelapse.

What 1000 can not do is film time-lapse. This means my old IXUS80 escapes retirement. My next trip to Jenolen will require the 80, a small tripod, and some blu-tack for sticking to the car dash.

Another pilsner from Austria. 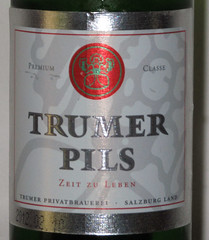 Trumer is a very pale pilsner with a small amount of carbonation, and small head that fades to a fine lacing on top.

First sip: Quite a lot of carbonation tingle on the tongue. Fairly hoppy, with a little lemony sourness that almost -- but not quite -- hides the malt.

Like Urquell Pils, once you get used to the hops you can then taste the other flavours. This pils most certainly does NOT have the WAH HOPS blast of Urquell. It's much milder, and more enjoyable for me. It has a nice beer burp, too.

As the beer warms in the glass the malt and citrus sourness becomes more obvious.

This is a good bbq beer. BBQ beer, with meat cooked on fire! 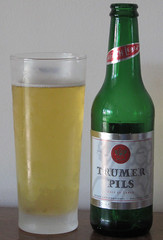