From Czech Republic to Poland: another pale Euro Lager. 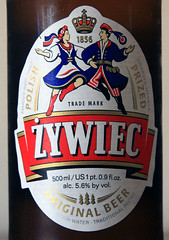 Pours a pale clear amber with a small head that vanishes fast.

First Sip: A lot of carbonation tingle on the tongue. Once that fades there is a mild malt that seems to wash away with a soda-water taste. A few seconds of nothing, then a bitter astringency builds on the back of the tongue.

The mouth feel is a bit thin but not watery. I'm still a bit undecided about this beer. It's... a lager; what you would expect from yet another brewery in the Heineken Empire. It does give a nice beery burp afterwards.

On the back label is a "Beer Thermometre" that changes colour to show when the beer is at the rght temperature to drink. Cute. I can tell you the best temperature without the thermometre: COLD. It does not warm well. But the 500ml of 5.6% acl/vol brought on a nice fuzzy feeling. I wouldn't want to drink too many in a session.

The deeper into the glass I went, the more drinkable the beer became. This is another Cold Beer On A Hot Day lager. Probably a good one for quaffing while sitting around the BBQ, but not one I would seek out. 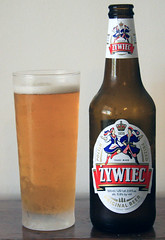