The journey around The Mediterranean continues. 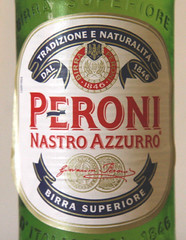 I had Nastro Azzurro when I was in Florence in 2005, but it was during a serious meeting so I couldn't study it properly.

The lager pours from the bottle a clear golden yellow - but so very pale! It has a small head that fades fast to a tiny head sustained by lot of bubbles rising up through the beer.

First sip: Small malt with a taste of grain - it's brewed with maize so it's milder than rice and finishes with a slightly sweet taste. The hops are mild and give a nice dryness.

This is a nice pale lager, smooth with mild grain sweetness. It's a good one for relaxing with on hot days. Another one brewed in Sydney, but "Under supervision" not just under license. I suppose that is better, but it's still brewed in BLOODY SYDNEY. It's not as good as the real Italian brew. 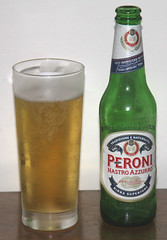