Yesterday a lady with a tupperware container walked into the office. "Are you in Wires?" she asked.

"Oh, [VET] told me. He said you look after bats." She handed me the container. Inside was a large bat.

It was a very large bat. In fact, she was a greater long eared bat, one of the larger insectivores. The lady found her on a screen door in the middle of town, in a vulnerable position where any shopper passing by would see her. There was nothing wrong with her, apart from being very grumpy from being handled. Perfectly normal. 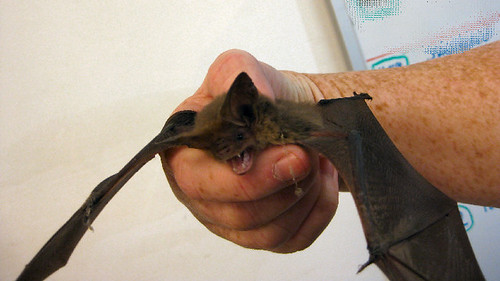 Her wings were huge. Holding her as I am in this photo, one of her wings reached the entire length of my fore-arm, right up to the elbow. She weighed 20 grams, instead of the 4 to 10g I usually see. I kept her in care until dark and let her go.

Also in care, a young noisy miner. I've has this honey eater since a tiny ball of fluff, and he's almost ready to go. He's self feeding on the nectar mix and chopped meal worms and is quite wild.

Also in care, Boyde, a magpie chick. His nest was blown from a tree, and was the only survivor. He is perching now and is STARVING TO DEATH! I've moved him to the large cage to stretch his wings, but I still have to take him to work in the little cage so I can feed him. He doesn't like the little cage.

And in other news, a pair of peewees are building their mud nest in the sycamore tree in the back yard. I have a feeling they are some I raised because they are quite unconcerned by my presence in the yard. Normally peewees are secretive, but these two call out like mad.

And in other news, a fellow rescuer has been handed a 120g, smooth, pink puggle. I wish I had it, but I have to be fair and share the puggle love around.